In which Clarice’s life is saved thanks to Luo Care

Click here to see our short film  (This film was made ages ago and the cost of the insurance premiums has gone up from £15 a year to £45. We still have to correct the film.)

Before we committed to setting up Luo Care, we ran a pilot scheme to test out how it would work. By signing up five widows, we discovered problems in the procedure that we would have to overcome. Eg. Every applicant needs an identity card and birth certificates for all her children before we can register them for health insurance. Most of the women cannot read or write, so we realised that Nicholas has to fill in the forms, get the photographs, submit the applications – extra work and cost we hadn’t anticipated before doing the pilot scheme. Now I can meet the five widows as Nicholas hands over their registration cards. When it’s cooler at around 4pm or 5pm, we walk to their huts dotted round the countryside and Nicholas tells me all about life in this area. 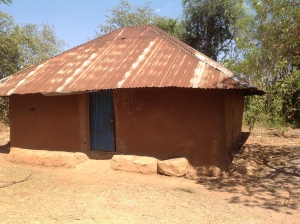 A typical hut where a widow lives with, on average, 4 children.

The five widows – Jacinta, Clarice, Caroline, Eunice and Emilia live in mud huts with corrugated iron roofs and earth floors. They have almost no furniture and cook outside over open fires. They carry water from holes dug in the beds of dried up streams and their tiny plots of land are too dry to cultivate. They live from day to day and health insurance is an impossible luxury. When we turn up with insurance registration for them and their children, they can hardly believe it.

Clarice, in particular, was in desperate need. She remained sitting on the ground, sifting dirt from dried beans, her solemn children watching as she was handed the card. She looked really depressed and lethargic. We didn’t realise that she was already seriously ill. Less than 24 hours later she was carried unconscious to Simbiri Health Centre suffering from HIV related illness and unlikely to survive. No one knew where the children were or whether anyone was caring for them. 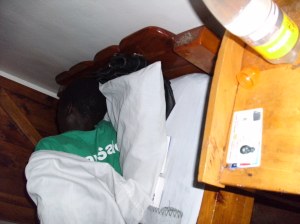 Clarice in the health centre with her insurance card beside her. 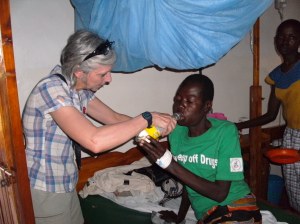 Having health insurance meant she was admitted and treated. Within two days, she was sitting up in bed, and eventually she went home. But her survival was touch and go – in fact without Luo Care’s insurance it would definitely have been go. It’s easy to be disheartened by the consequences of overwhelming poverty in this part of Kenya. But whenever I think “Oh, what’s the point? We’re flogging a dead horse here,” I try to think of Clarice and her kids and remind myself that Luo Care saved her life, stopped her children becoming orphans and in the wider scheme of things is making a tiny, tiny difference. Sermon over.