Click here to view video   (This film was made ages ago and the cost of the insurance premiums has gone up from £15 a year to £45. We still have to correct the film.)

This is to say a big thank you for all your donations to Luo Care, which pays for health insurance for the poorest widows and children in Simbiri in Western Kenya. Now that we have been running for five years, it feels as though the whole community is benefiting from the improved health of a group of women. Staff in the local school and health clinic and the village Chief all tell us how important Luo Care has become.

The following details reflect your generosity:

Most of the beneficiaries’ lives follow a familiar course – married young, widowed, abused and left with children in abject conditions, scratching a paltry living from the soil. Almost without exception, they survive by growing maize, cassava and millet to eat. They earn tiny amounts of money by making and selling charcoal and sisal ropes, and doing odd jobs.

Occasionally, widows tell us of hair-raising experiences that show how perilous life is. One woman’s husband was robbed and murdered, leaving her destitute with 7 young children. No savings, no life insurance, no job, no money for food or education. Another husband was shot and killed during post election riots. His widow fled with her children and slept rough for months.

Now and then we come across a widow who, somehow or other, shows extraordinary strength and determination. Grace Mercy Omondi was a schoolgirl aged 15 when she became pregnant. She married the father and had 3 children before he died of asthma.

The Luo custom is that any male member of the deceased man’s family can “inherit” the widow. They are usually abused and abandoned when they become pregnant. Grace Mercy was “inherited” by her husband’s cousin, but she threw him out eventually. She prefers to soldier on alone. Her home is the most comfortable we have visited in Simbiri. Her children are healthy and lively and she even has topiary in the shamba!

More and more women are following Grace Mercy’s example and refusing to be “inherited,” saying they are better off on their own.

Finally, my annual reminder that every penny you donate is spent on health insurance. We can promise that your money always reaches those most in need and Ann and I pay for everything else.

Today, Luo Care has 164 widows and nearly 650 children registered with the Kenyan government’s health insurance scheme. Your generosity means we guarantee their  health care until September 2020. Almost the only certainty in their lives is that they can now have medical treatment whenever they need it, often for the first time in their lives.

Nearly all the women are in their 20s and 30s, with young children, but some are grandmothers bringing up grandchildren whose parents have died, often because of HIV related illnesses.

Almost without exception, they survive by growing maize, cassava and millet to eat. They collect wood to make charcoal which they can then sell, or do odd jobs like weeding or child care for other people. It is a hand to mouth, uncertain existence in an unforgiving environment.

AIDS and HIV related illnesses means there has been a dramatic reduction in the population of young men aged 18-40. This is taking its toll on the whole community, which suffers from the loss of fathers, role models and breadwinners. Schools say the most troubled children are those living with grandmothers who are worn out and simply don’t have the means or the energy to cope with them.

Every year, I write that every penny you donate is spent on health insurance. I make no apology for repeating this. Charities have had such a bad press this year that we are keen to reassure you that your money always reaches those most in need, and Ann and I pay for everything else.

It is touching to see how much the women appreciate your help. It is making a real difference to some of the poorest people in the world. 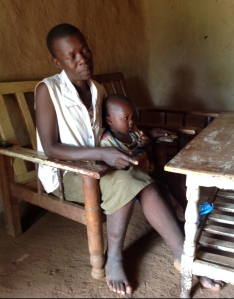 Irene in her home.

IRENE ACHIENG MBOYA is a 30-year-old widow with  5 children. They were homeless and slept rough until a local church provided her with a house with two rooms, earth floors, no windows, no electricity, no running water and no latrine. She was so weak that she couldn’t work and her children had to fetch water from a stream.

Irene walked 6kms to collect her Luo Care health insurance card.  When she arrived, we noticed she had finger clubbing and discovered she had untreated, highly infectious tuberculosis. Luo Care told health workers, and thanks to her health insurance she received treatment that saved her life.

Today we have 124 widows and nearly 500 children registered with the Kenyan government’s health insurance scheme. Between 2014 and September this year, their overnight admissions in the nearest health centre totalled 2947 times. They are guaranteed health care until September 2019.

They are most commonly treated for malaria and other HIV related illnesses.

In the Simbiri area, another 256 widows and 1030 children have no health insurance. We want to register as many as possible but this means raising a lot more money.

It is worth remembering that 60% of adults in the area are HIV positive.

Every single penny from donors is spent on health insurance. Ann and I pay for everything else, from travel and food to administration. We are very, very grateful for donor’s generosity.

When we first started, the women and children were emaciated, worn out with illness and their daily struggles. But after three or four years of health care provided by Luo Care, some are transformed. They’ve gained weight, have more energy and even formed their own football and netballs teams which give them chance to get together once a week.

Widows tell us health insurance provided by Luo Care, which costs only £45 a year per family,  has saved their lives. Endemic illnesses like malaria are treated quickly and the women and children recover. Before Luo Care, they had no insurance and no medical treatment so they became seriously ill or even died. You can be sure that your contribution is making life so much better for the poorest women and children.

It’s London Marathon day featuring my favourite soon-to-be niece-in-law Sophie Corbett doing her first marathon and raising money for Luo Care. She’s tiny, so she has to take twice as many steps as anyone else but she’s clocked up the amazing time of 3hrs.55mins. Flippin’ heck Sophie. She must be a natural, which means in a few months she’ll probably be doing an Iron Woman across the USA or the Sahara. Sponsorship money is still coming in but it looks like over £500. Huge thanks to all who donated and heartfelt thanks to Superwoman Sophie.

Here is our youngest supporter, James Junha Lee, who started raising money for Luo Care even before he was born!

Not only is he cute, he’s clever too. His Mum and Dad are Seong-Joon (aka SJ) and Elizabeth Lee, both physiotherapists, and SJ has been using every ingenious exercise known to Man to restore me back to physical adequacy after I had a bike accident.

SJ held a birth prediction competition, inviting sponsors to predict the birth weight and sex of his first baby. Then best friends Paul and Lucy MacLeod, who were also expecting their first child, joined in. Result? Lots of lovely dosh for Luo Care, and two tiny people with great parents. How smart are they?

For the record, James was born on April 8th and weighed 8lbs 5oz. Allie Abigail MacLeod arrived the next day and weighed 7lbs 13oz.