In which we arrive in Kenya in our new role as do-gooders, settle into the no frills accommodation and wonder what the hell we’re doing. We have 10 days to tackle bureaucracy, establish a new charity and fight off mission creep.

Our small plane touches down at a tiny airport, Kisumu, which is sprucer than Nairobi International Airport. As we wait for our contacts to arrive we make the most of the last flushing toilet for 10 days, and the sound of two groups of women singing in harmony echoes round the airport.

Outside, it feels like someone’s blasting a hair drier in my face. 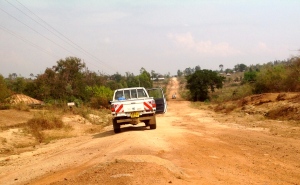 I swallow a travel sickness pill ready for two hours joogling around in a pickup truck that Daniel the Driver bounces right over a roundabout and weaves over broken tarmac and clouds of red dust, jokingly called a road.  The truck is usually used to move corpses from villages to the mortuary in Simbiri Nan Bell Health Centre.

We’re staying in the house of the Health Centre’s founder, built 30 years ago. There’s no flushing toilet or shower, only 2 hours electricity at night, the fridge is knackered and water comes in buckets brought from a local well or river 6 kms away. It’s a palace compared to the locals’ mud huts – four walls, earth floors, corrugated iron roofs and kerosene lamps for the lucky ones.

We unravel mosquito nets and slap on insect repellent before Ann does the rounds. She’s a GP and spent 5 months volunteering here in 2010, plus 2 weeks on subsequent years, and everyone calls her Dr Ann. On an earlier visit she discovered that widows with dependent children are at the bottom of the pile in this poverty stricken area. Although only £15 a year pays for the hospital insurance of one widow and all her children under 18, that’s an impossible fortune they cannot afford.

Our new charity, Luo Care, wants to pay the £15 for health insurance for the worst off widows and children.

Back home, we’ve tapped up friends and relatives who have pledged to take out standing orders. We have an HMRC number so we can claim Gift Aid. Most importantly, weeks ago we set the wheels in motion to open a charitable bank account  – more on this later. (Spoiler alert – if you’re thinking of opening an account with Lloyds Bank, my one word of advice is DON’T.)

Using torches to bumble around in the pitch dark, we crawl under the mozzie nets for sleep interrupted by yowling dogs, drums pounding in villages where someone has died, and my body melting in the heat.

For the full story, click here to watch a short film  (This film was made ages ago and the cost of the insurance premiums has gone up from £15 a year to £45. We still have to correct the film.)