In which we learn about the night life and try to win round volunteers.

Dogs here are night animals. By day, they keep a low profile, skulking around or sleeping in the shade. Come darkness, it’s party time. Barks, yelps, yowls and howls meld into an orchestral cacophony which sounds like distant music as I quietly melt on the bed.

Dry leaves and twigs clatter on the corrugated iron roof above me, and birds’ claws make such a racket they must be the size of eagles.

Security men in flip-flops shuffle round the outside of the house.

Then, in almost total darkness, a sudden silence falls like a blanket. Why do the dogs, humans, birds and leaves all do a synchronised stop?

She hunts antelopes, chases hyenas, and turns her nose up at lumpy porridge.

Later on, I stroll up to the security guards, a grandiose title for blokes who sit around chatting and open or close the gate of the health centre compound now and again. “Why are the dogs so noisy at night?” I ask. They think the question is hilarious – don’t you have hyenas in Northumberland? – and explain that yowling hyenas prowling around trying to catch livestock as snarling dogs try to protect calves and hens. Silence falls when the hyenas retreat.

Dogs go hunting with gangs of barefoot men wielding spears and clubs who stalk antelope in the scrub. The idea of keeping a dog for a pet is ludicrous, so when I befriend Woofie Dawg I feed her very surreptitiously indeed.

We have a meeting with the Community Health Workers (CHWs) who will be key to Luo Care, because we want them to identify the most needy widows who need health insurance. 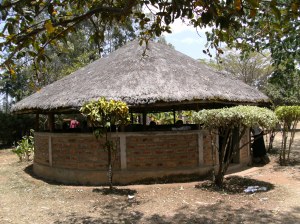 A cool hut where we meet the Community Health Workers

The CHWs are unpaid volunteers from 15 districts, who live in small villages and know everything about everyone. We explain the purpose of Luo Care and outline our plan in which they identify the recipients and then Nicholas and the local Chief endorse the widows they suggest, and we pay for their hospital insurance. They have an essential role but many CHWs are widows themselves, desperately needing support.

They look glum and ask what small thing we can give them for doing this very important job, meaning will we pay them? The last thing they need is more unpaid work. Ann stresses that every penny is for the poorest widows but offers a Fanta and a chapatti each. One CHW rolls her eyes and the others laugh – yes, they’ve been here before, haven’t we all, and I didn’t much like it when it happened to me.

“You’re terribly important and creative and now you have to use that creativity to find new ways of working for less money,” blah blah blah. I got a bunch of flowers and a bottle of wine instead of a pay rise and the health workers get a chapatti and Fanta.

Somehow we win them round, but no one looks delighted.

Supper – Fried potatoes and onions with dried oregano and rosemary. Semolina and marmalade.

Click here to see our short film   (This film was made ages ago and the cost of the insurance premiums has gone up from £15 a year to £45. We still have to correct the film.)